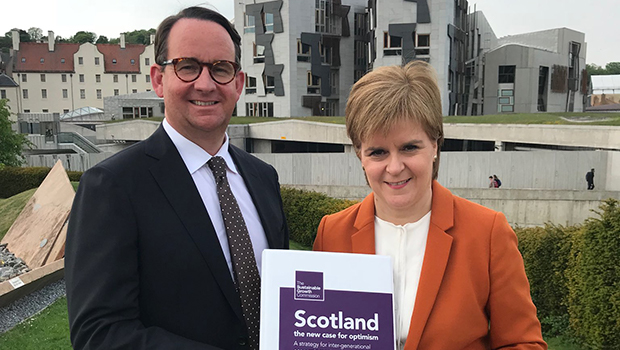 The report of the Sustainable Growth Commission for Scotland has been published today and is moving the debate on independence to the next stage. The report has been 18 months in the making and the committee comprised some of the brightest minds in Scottish public life, drawing from a deep talent pool which included business people, academics and economists as well as elected politicians. The Commission members gave their time pro-bono and the report was wholly funded by the Scottish National Party, rather than the taxpayer.

You can read the full report here: https://www.sustainablegrowthcommission.scot/report/

One of the key findings was that the currency of an independent Scotland should remain the pound for at least a transitional period. This is a sensible proposal that has been given additional credence recently by Mark Carney, Governor of the Bank of England, who when giving evidence to the Commons Treasury Select Committee earlier this week seemed keen not to rule it out as an option. This was despite leading questions from anti-independence supporters who clearly hoped this was the tack he would pursue.

It is telling that with Brexit looming, the Governor of the Bank of England has effectively rolled back from his position during the 2014 referendum. It may just be beginning to dawn on senior people in the rest of the UK that whatever the Scottish currency is, it will be backed by substantial oil revenues and therefore will, in the words of the McCrone Report from 40 years ago “become the hardest in Europe with the exception, perhaps of the Norwegian Kronor. ”

The report gives cause for much optimism in an independent Scotland’s economic prospects. Scotland is in the “sweet spot” for size. Contrary to some views, it is far from being too small to survive on it’s own and has advantages in natural wealth as well as tourism and worldwide exports that place it firmly alongside some of the best performing economies in the world.

The Sustainable Growth Commission sees that there is a chance to reverse some of the inbuilt inequality that is so prevalent in the UK system and that is reinforced by Tory austerity measures. One of the important conclusions from the Growth Commission is that legacy debt from being part of the UK can be tackled and reduced, whilst not having a negative impact on public services for Scotland’s people.  The report rejects austerity and believes it is a failed approach.

This is a comprehensive and nuanced report that looks in detail at the options available. It weights in at a hefty 354 pages and it is good to see that the SNP are treating the people of Scotland with the respect they deserve by putting forward these detailed proposals for consideration, before a referendum is even on the table. The publication of this report has bolstered their credibility on the economic case for independence. We look forward to hearing whether there will be a similarly weighty document in support of staying in the UK.

It is important to remember that with Brexit looming, there is no such thing as a “safe” option. Staying in the UK carries just as many risks as becoming independent and it is to be hoped that this is adequately addressed this time by anti-independence campaigners.

Short videos from the Sustainable Growth Commission are embedded below: