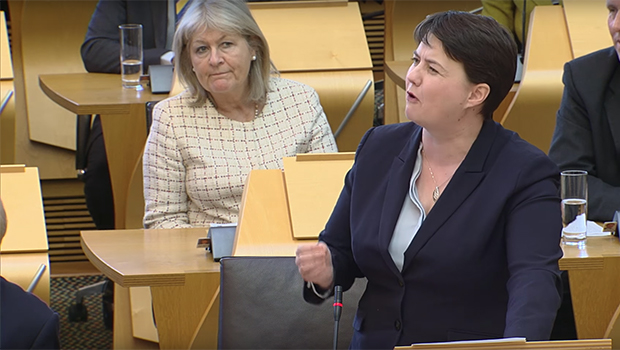 The phrase “people in glass houses shouldn’t throw stones” has seldom seemed as apt as at today’s First Minister’s Questions in Holyrood. Ruth Davidson rose to her feet and asked the First Minister about a consultant employed by the SNP meeting with the highly controversial Cambridge Analytica, who were involved in the Trump election campaign.

At this point, the Presiding Officer should really have intervened to remind Ms Davidson that she should be focusing her questions on Ms Sturgeon’s role and responsibilities as First Minister of Scotland, rather than as her other role as Leader of the Scottish National Party. He belatedly mentioned this at the end but he should not have allowed the question in the first place.

Not that Ms Sturgeon minded this line of questioning one bit as she gleefully took the opportunity offered by her opponent and ran with it, much to Ruth Davidson’s obvious and immediate discomfort. If Ruth Davidson thought she could embarrass the SNP by bringing up the meeting, it was clearly a misjudgement as Sturgeon explained a consultant had met them once, branded them cowboys and neither the SNP nor the Scottish Government had ever engaged their services.

“We have never worked with Cambridge Analytics, we’ve never hired them, we’ve never paid them any money to do any work for us.” – Nicola Sturgeon

But… and her grin grew wider as the trap slammed shut… Ruth Davidson’s party had very close links to Cambridge Analytica and their parent company, according to Ms Sturgeon. She went on to explain:

“We know that the links between Cambridge Analytics and SCL their parent company are many and legion:

After this devastating onslaught, Ruth Davidson was left claiming that the Party she leads has never met, worked with nor engaged the services of Cambridge Analytica. This, in a convoluted, roundabout way is the truth. Ruth Davidson doesn’t lead a political party. There is no political party registered with the Electoral Commission called the “Scottish Conservative and Unionist Party”. There is only the Conservative and Unionist Party, which has the above links to Cambridge Analytica but is undoubtedly not led by Ruth Davidson.

Next up was the Labour Party’s Richard Leonard, who has been slated in recent weeks for seemingly not knowing the difference between matters reserved to Westminster and those devolved to the Scottish Parliament. At this time of asking, he managed to ask about an issue within the responsibility of the First Minister by raising questions about the problems of NHS Tayside. It is the place of the opposition to ask the important, sometimes difficult questions and this was a legitimate attempt which was answered robustly by the First Minister, Mr Leonard went on to call for the resignation of Shona Robison, the Cabinet Secretary for Health in the wake of the problems.

Willie Rennie of the Liberal Democrats raised the important issue of mental health services for new mothers. The First Minister responded that work was being undertaken and that she would be happy to communicate with him directly. Mr Rennie raised the point that “the tragedy of suicide is the leading cause of Maternal death.” and went on to say that mental health provision was fast becoming the Scottish Government;s “record of shame”.